Kibbutz Tirat Zvi was established on 21st of Tammuz, 5697, (June 30, 1937) as a "Tower and Stockade" settlement intended to mark the southern limit of Jewish settlement in theBetSheanValley.
Its first decade was marked by ceaseless struggle for existence against extremely difficult climatic conditions, swamps, malaria, tense day-to-day relations with local Arabs, and periodic organized enemy assault.
On the 6th of Adar 56, 5708, (February 16th, 1948), the one hundred primitively armed members of Tirat Zvi repelled a coordinated attack by over six hundred regular Iraqi troops.

From 1967 to 1970, following the Six Day War, the kibbutz was the object of continual shelling and terrorist attacks during the War of Attrition. 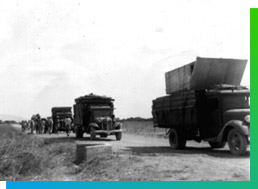 After the Six Day War, members of Tirat Zvi were free to apply their energies and thought to the development of its economy.
After much 'hit-and-miss' experimentation, the following branches of agriculture were found to be successful and profitable: wheat, cotton, carrots, potatoes, dates, olives, fish farming, and turkeys. As a by-product of our large date grove, Tirat Zvi markets large quantities of "Lulavim" every year before Succoth.
Along with agriculture, Tirat Zvi's factory for production of sausage and smoked meats - "Tiv" - greatly expanded, marketing its high quality products to all parts of the country and the world. The factory's work force is composed of seventy kibbutz members and one hundred and fifty outside employees, most of whom are from the neighboring town ofBet Shean.
New branches recently came into being: "Tiv Beiti" ("Home Tiv") supplies meals to institutions and for social events; "Iruach Kafri" ("Rural Hospitality") - comfortable apartments for weekday, Shabbat, and holiday vacations; "Derech HaTamar" ("The Road of the Date") - guided tours of the local area; "Collage" and "Menno Designs" - stained glass artwork  and a variety of holistic therapies. 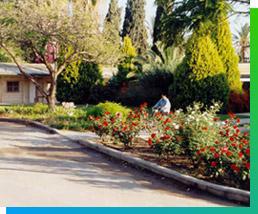 The Kibbutz founders came to Israel (then Palestine) from central Europe (Poland, Germany, and Romania) and were subsequently joined during the following decades by immigrants from England, North America, groups of the Israel B'nei Akiva Youth Organization ("Geulim", "Nechalim", "Shachal", "Yachdav", "Tsurim", "Kissufim", "Nechusah"), and individuals from all from all over the world.
All Jewish ethnic groups are woven into our demographic fabric. Current population numbers approximately seven hundred persons, two hundred and seventy of which are children, Youth Aliya students, and temporary residents.

In recent years, the kibbutz has encouraged young families to make their home on the kibbutz as permanent residents, and as a result of this strategic change, the kindergartens once again are full to overflowing, and toddlers take their daily walks along the paths.
The last decade has seen the construction and growth of "Atereth Zvi" - a chronic care facility which provides full support for incapacitated members.

Soon after the establishment of the State of Israel, the children of Tirat Zvi began to attend theRegionalSchoolof the Religious Kibbutz Movement in theBethSheanValley.
The school provides twelve years of education, full matriculation, and offers it's students academic and vocational tracks. Every young person born on the kibbutz is entitled to a university education or it's equivalent, and is free to decide how and when he or she will exercise this right.
In 1977, the children of the children left the communal children houses, to live in their parents' homes. This, of course, necessitated enlargement and modification of many homes.
A Youth Aliya group of thirty teenagers dorm and receive their education in Tirat Zvi. They complete high school matriculation, work in the kibbutz, and benefit from an active social environment.

OUR RELIGIOUS LIFE
The synagogue was built in the twentieth year of the kibbutz and was expanded thirty years later. Traditional services are held every day. Beautiful and inspirational Shabbat and holiday services are led by cantors and Torah readers of four generations. Communal singing is characteristic of kibbutz services. The services preserve the traditions of the German-Jewish community where many of the founding members grew up, while incorporating many melodies current inIsraeltoday.
With the break of dawn, members precede work with the Shaharit service; atnoonthere are Mincha services for pupils returning from school and for workers from the field, orchard, and factory. The Maariv service is attended by a large number of members who often meet briefly after the service to plan for work the following day, and to discuss the day's events.
Regular study groups and classes are conducted for various age groups before and after Maariv on weekdays; on Shabbat, members gather to learn Torah and Talmud before the Shaharit service and in the afternoon.
An additional Bet Midrash was recently outfitted and is utilized for study by individuals and study groups. 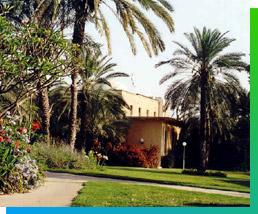 Members participate in varied special interest groups, classes, choirs, and athletic activities both in the kibbutz and at the Regional Council. A rich cultural program includes lectures, hikes, "homemade" theatrical productions, holiday programs, etc.
Approximately seventy members study at institutions of higher education throughout the country.
Like all other kibbutzim in our region, the settlement is surrounded by a security fence. Many bomb shelters, long inactive, dot the kibbutz.

What's worthwhile seeing in the kibbutz?

In winter one must not miss the blooming of the irises; the lush vegetation on the shores of the Jordan River; myriad migrating water fowl resting in the fish ponds; the scale model of "HaTira" - the kibbutz as it was in its initial years; the "slik" - the clandestine weapons cache of the pre-State days; and the rich and complete archives.

If pre-arranged, it pays to tour our sausage plant "Tirat Zvi 2000" during work hours. There are interesting innovations in the fish-farm facilities, in the growing of field crops, orchards, and turkey runs. The kibbutz dining room, despite partial privatization, continues to take pride in its renowned cuisine; the gefilte fish, the spicy fish, the eggplant salads, the chopped liver, and super soups which have tickled the palate for sixty years.
Tirat Zvi is famous for its warm welcoming atmosphere. We hope you will enjoy your visit
מערכת הצבעות דיגיטליות הצבעה דיגיטלית אתר לקיבוץ קריאות שירות קריאות שירות יישוב רותם